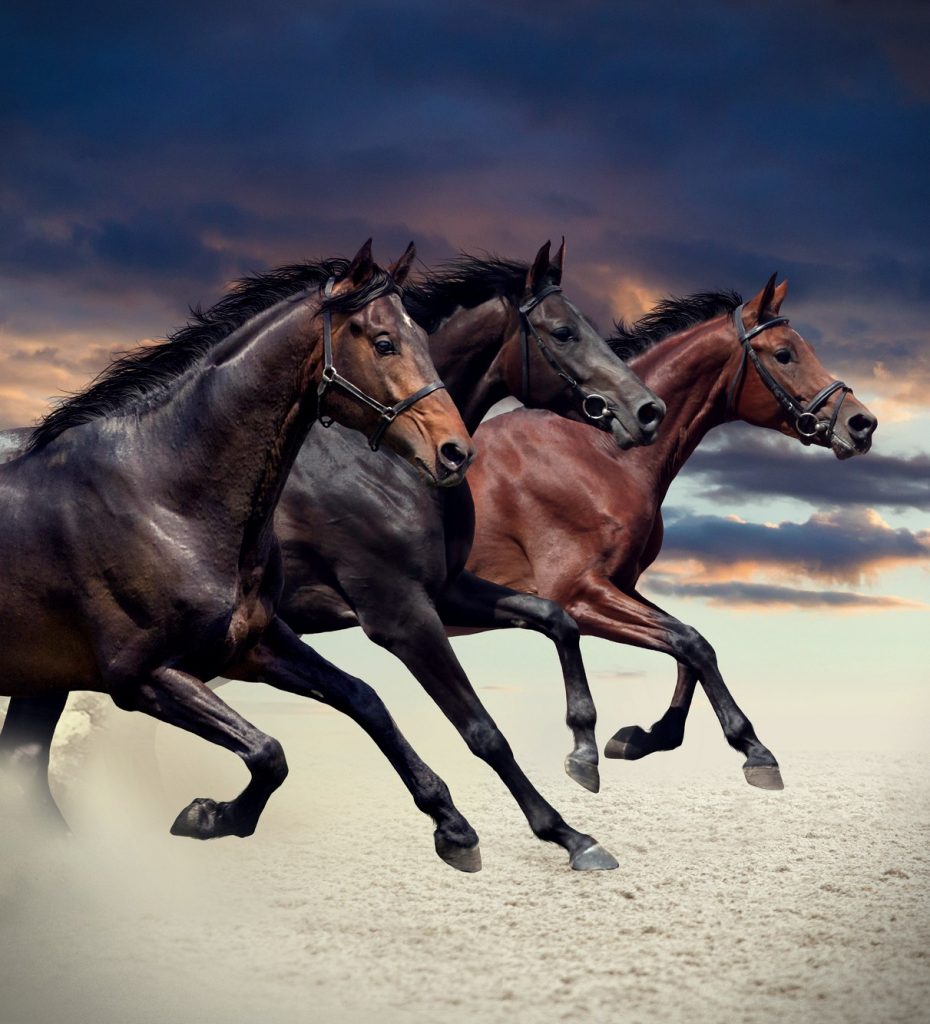 THE horse is one of the most mysterious of all creatures. It falls perfectly upon the dividing line between tame and wild, between docile and feral. It is also said to be a “mirror of the soul” as it reflects back to us our own fears and insecurities (see Belle, and Training for Courage).

One of the most beautiful things to watch among a herd of horses is how they move in sync. They can dart and weave, dash and juke in complete unison without running into the other or taking over another’s space. It’s as if they have a single will.

I have been addressing the “Gift of living in the Divine Will” for the past couple of weeks and I’m sure many of you are asking what exactly this is. Don’t worry, I’ll do my best to explain this in the weeks ahead, including today through the following analogy…

There is a mystique surrounding those whom popular culture calls “horse whisperers,” as if they have a secret way to communicate 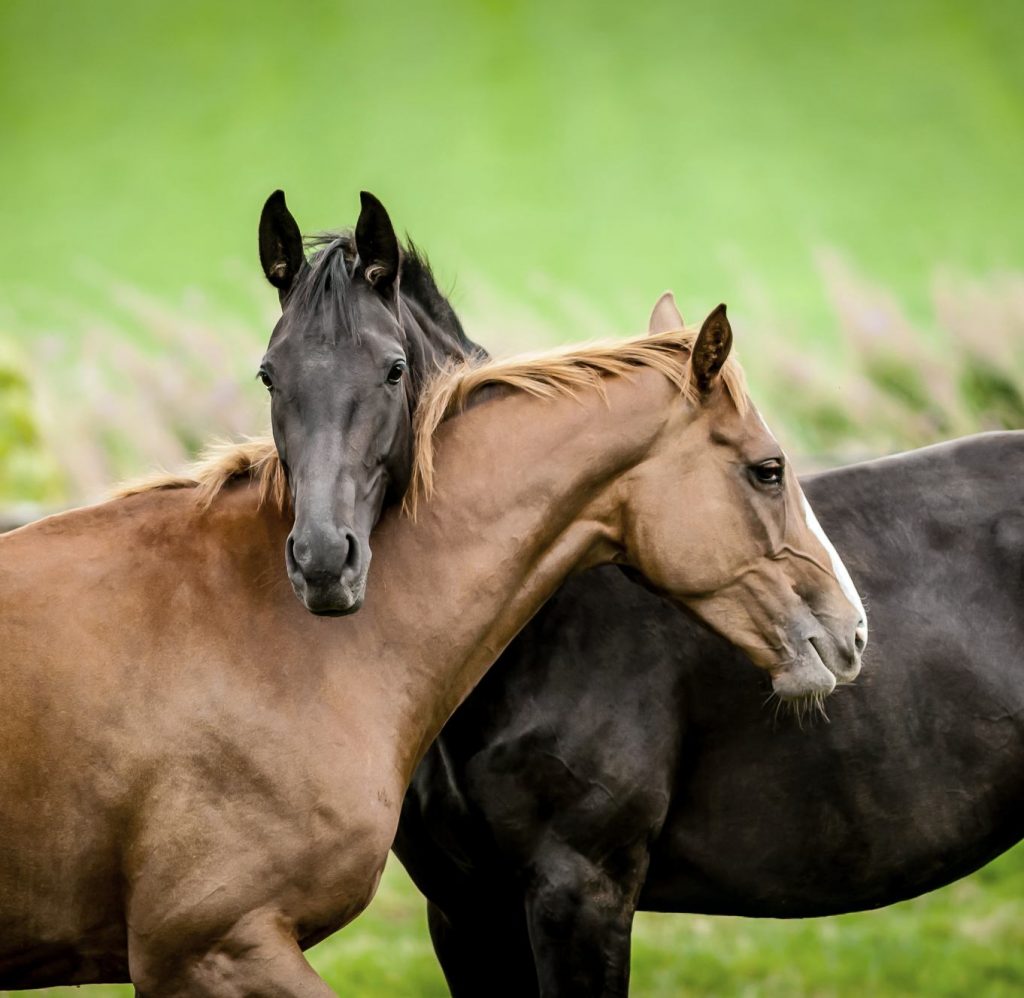 with horses. But really it’s what is called “natural horsemanship,” what my wife and I apply to our herd all the time. It’s simply learning the language of horses as they are among each other, and then applying this language in our training.

Horses have a natural “fight or flight” instinct, so they constantly seek leadership within the herd. The idea, then, is for a trainer to become a leader whom the horse will trust and follow. In the beginning, a horse will yield to a trainer out of fear lending the appearance that it’s in sync with its rider… but that’s not necessarily the case. Often, a horse can be a ticking time bomb that suddenly bucks or bolts because it really doesn’t find leadership in its rider.

Natural horsemanship, then, is about building a relationship so that the horse finds its leadership and comfort in the trainer rather than submitting out of fear.

Something beautiful happens when a horseman “connects” with a horse in this way. It will begin to follow its leader out of trust rather than tension; it begins to rest in its trainer. If the leader moves forward, the horse 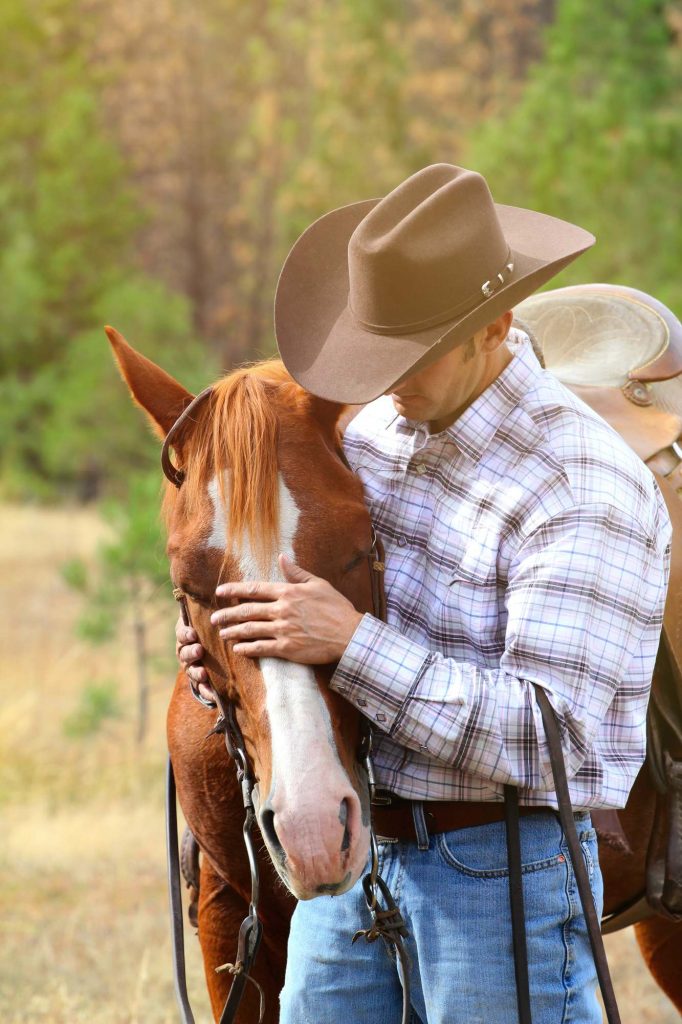 follows; if he stops, so does the horse; if he turns, changes pace, or reverses, it’s is right there with him. Now, a horse can learn to conform to its leader’s will, even perfectly. But most often, this is only when the horse has a lead rope or halter around it. As soon as that rope comes off, the instinct to return to the herd is often stronger than the desire to stay with its human leader.

However, when the connection between a horse and its leader is total and complete, the horse will begin to move at liberty with the trainer, that is, without a lead rope and halter. It’s really an emotional moment and lovely thing to see. In fact, really good horsemen, like our Canadian mentor Jonathan Field, will tell you that a horse can begin to move when you even think about what you want. It’s as if the horse and rider now have a single will.

I don’t know a better way to learn horsemanship than to pursue a relationship with a horse that is free without ropes attached. —Jonathan Field, Canadian natural horseman

To illustrate this, watch Jonathan at work with his horse Hal who, at one time, was an unpredictable and sour gelding:

TAMING THE HUMAN WILL

Since the fall of Adam and Eve, God has been taming the human will. In fact, when they covered themselves in leaves and hid from their Creator, the human race has been in “fight or flight” mode ever since! But 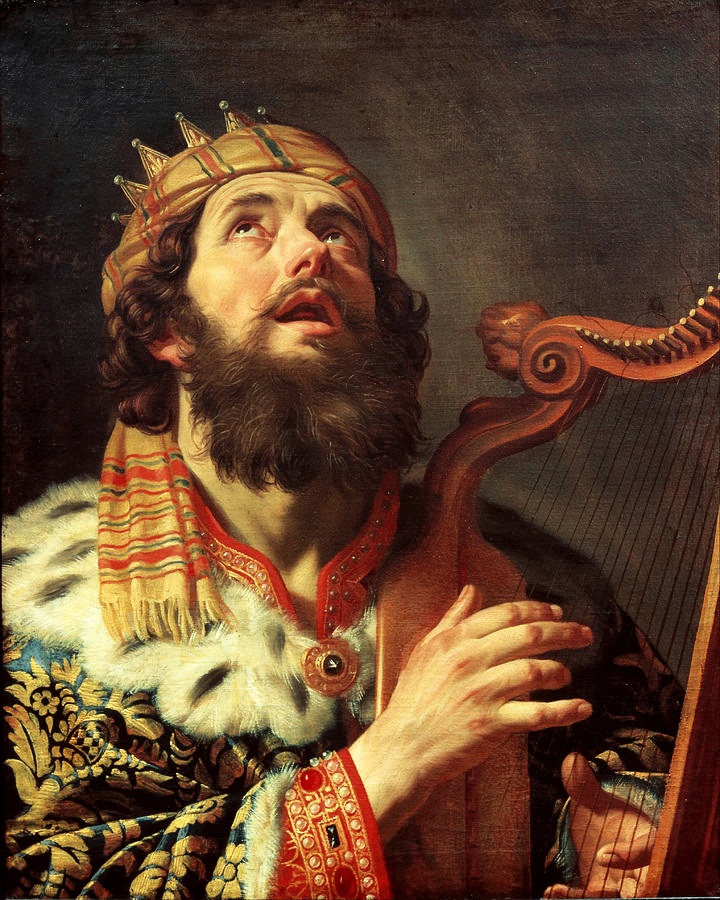 slowly, over the course of millennia, God the Father has whispered to the soul of man, calling him back to Himself. Through the prophets and patriarchs, He revealed that He is a loving God, “slow to anger and rich in mercy,” a tender Father whom we can trust. And that, if we remain in Him, we will find true peace and rest. King David learned that God’s will was the source of life and joy for him, leading him to pen the beautiful canticle to the Divine Will in Psalm 119, and this tender verse:

I do not occupy myself with things too great and too marvelous for me. But I have calmed and quieted my soul, like a child quieted at its mother’s breast; like a child that is quieted is my soul. (Psalm 131:1-2)

David learned that the soul’s rest was found by a faith expressed in obedience. As the Lord said of the Israelites:

“They shall never enter my rest”… because of disobedience. (Heb 4:5-6)

When the Word became flesh, Jesus revealed that He is our rest; that through His power and grace, we can overcome our human will so inclined to fight or flee from Him.

I do not do what I want, but I do what I hate… For I know that good does not dwell in me, that is, in my flesh. The willing is ready at hand, but doing the good is not. Miserable one that I am! Who will deliver me from this mortal body? Thanks be to God through Jesus Christ our Lord. (cf. Romans 7:15-25)

In other words, Jesus was to be…

But now, in these last times, Our Lord wants to do more than simply lead His saints like a horse with the rope of His commandments around our will. Rather, He desires to restore in us what Adam and Eve lost, which was not merely a “doing” of God’s will, but of living in the Divine Will in total liberty such that there becomes a single will.

My descent upon earth, taking on human flesh, was precisely this—to lift up humanity again and give to my Divine Will the rights to reign in this humanity, because by reigning in my Humanity, the rights of both sides, human and divine, were placed in force again. —Jesus to Luisa, Feb. 24th, 1933; The Crown of Sanctity: On the Revelations of Jesus to Luisa Piccarreta (p. 182). Kindle Edition, Daniel. O’Connor

Under Moses, the People of God learned obedience, but often out of fear. In the New Covenant, the saints learned to obey God perfectly, and out of love at that. But Jesus came to do more than ask for our flawless allegiance (in the way that a slave may perfectly fulfill the will of his master but remains but a slave). Rather, the Father wants His Will to reign in us “on earth as it is in heaven.” In revelations to Servant of God Luisa Piccarreta, which have been approved by the Archbishop of her diocese and cleared by Vatican theologians, Jesus reveals that this Gift of living and resting in the Divine Will is 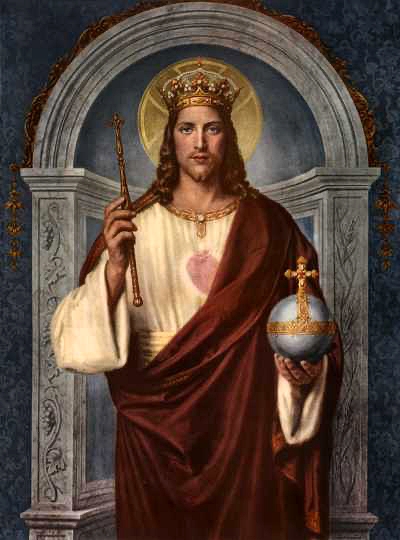 precisely what we have been praying for as a Church for over 2000 years:

My very prayer to the heavenly Father, ‘May it come, may your kingdom come and your Will be done on earth as it is in heaven,’ meant that with My coming to earth the Kingdom of My Will was not established among creatures, otherwise I would have said, ‘My Father, may Our kingdom that I have already established on earth be confirmed, and let Our Will dominate and reign.’ Instead I said, ‘May it come.’ This means that it must come and souls must await it with the same certainty with which they awaited the future Redeemer. For My Divine Will is bound and committed to the words of the ‘Our Father.’ —Jesus to Luisa, The Gift of Living in the Divine Will in the Writings of Luisa Piccarreta (Kindle Location 1551), Rev. Joseph Iannuzzi

This reign of the Kingdom of the Divine Will is approaching, though it has begun in some souls since Luisa first received it, and is being opened to the Church at this hour, including my readers through these current writings. [1]

The Church of the Millennium must have an increased consciousness of being the Kingdom of God in its initial stage. —POPE JOHN PAUL II, L’Osservatore Romano, English Edition, April 25th, 1988

In our analogy, then, this coming reign is like that last and more rare stage when a horse and rider merge into a single will. The horse is at liberty—totally free—and yet, its will is now its leader’s. This is the kind of freedom Adam once had, Our Lady was given, and Jesus wants to restore to the Church in the last stage of salvation history.

For freedom Christ set us free; so stand firm and do not submit again to the yoke of slavery. (Galatians 5:1) 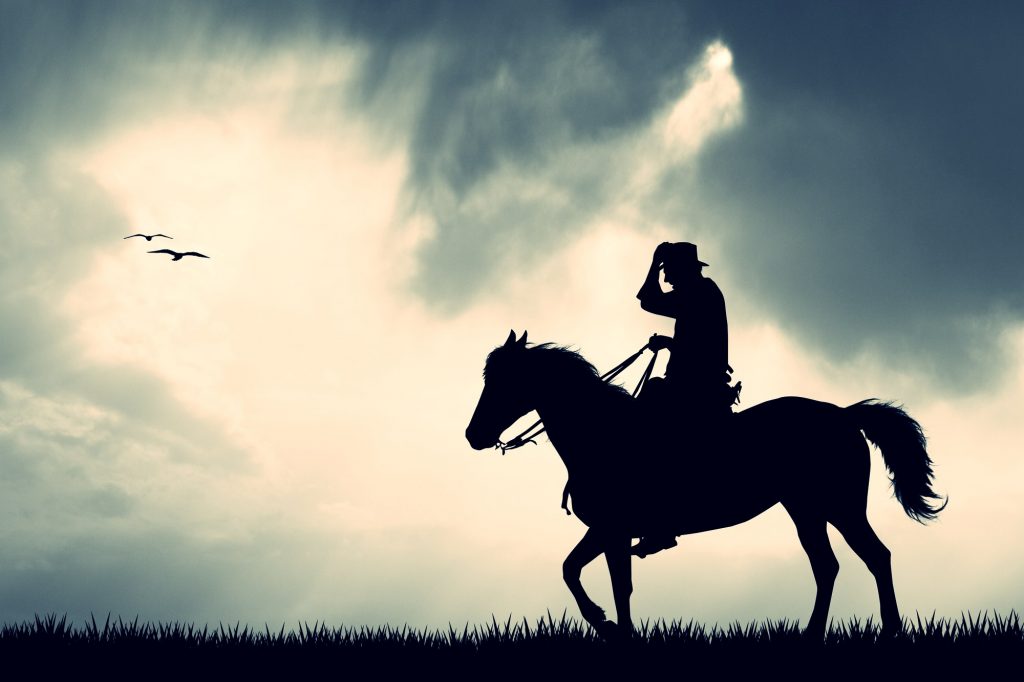 To live in My Will is to reign in it and with it, while to do My Will is to be submitted to My orders. The first state is to possess; the second is to receive dispositions and execute commands. To live in My Will is to make My Will one’s own, as one’s own property, and for them to administer it as they intend; to do My Will is to regard the Will of God as My Will, and not [also] as one’s own property that they are able to administer as they intend. To live in My Will is to live with one single Will […] And since My Will is all holy, all pure and all peaceful, and because it is one single Will that reigns [in the soul], no contrasts exist [between us]… On the other hand, to do My Will is to live with two wills in such a way that, when I give orders to follow My Will, the soul feels the weight of its own will which causes contrasts. And even though the soul faithfully carries out My Will’s orders, it feels the weight of its rebellious human nature, of its passions and inclinations. How many saints, although they may have reached the heights of perfection, felt their own will waging war on them, keeping them oppressed? Whence many were forced to cry out: “Who will free me from this body of death?”, that is, “from this will of mine, that wants to give death to the good I want to do?” (cf. Rom 7:24) —Jesus to Luisa, The Gift of Living in the Divine Will in the Writings of Luisa Piccarreta, 4.1.2.1.4, (Kindle Locations 1722-1738), Rev. Joseph Iannuzzi

When a horse and rider have reached that precious stage of a single will, even though the horse may be galloping—it is at complete rest in his leader whom it trusts. Indeed, St. Paul and the Early Church Fathers foretold how the Kingdom of the Divine Will is synonymous with a coming universal “rest” for the Church…