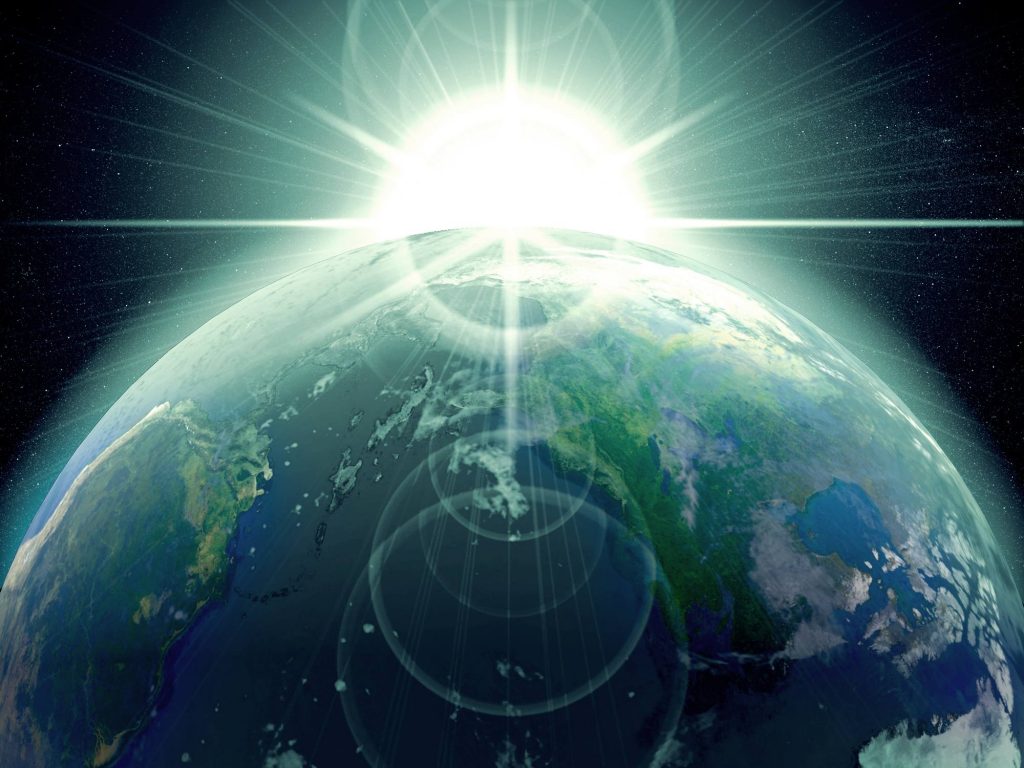 I want to say it as clear and loud and boldly as I possibly can: Jesus is coming! Did you think that Pope John Paul II was just being poetic when he said:

Would you say that, if this is true, it constitutes a stupendous task for these watchmen?

I did not hesitate to ask them to make a radical choice of faith and life and present them with a stupendous task: to become “morning watchmen” at the dawn of the new millennium. —POPE JOHN PAUL II, Novo Millennio Inuente, n.9

I have, as best I can, made radical choices of faith and life in order to answer this call, made to me as well, as I stood in the driving rain at that World Youth Day in 2003 in the presence of that great Saint. Was not the rain and stormy clouds that gloomy day symbolic of the cry of the great Marian saint, Louis de Montfort, who would likewise influence the course of John Paul II’s life and pontificate whose motto was Totus Tuus “totally yours” (as in totally Mary’s in order to be totally Christ’s)?

Your divine commandments are broken, your Gospel is thrown aside, torrents of iniquity flood the whole earth carrying away even your servants… Will everything come to the same end as Sodom and Gomorrah? Will you never break your silence? Will you tolerate all this for ever? Is it not true that your will must be done on earth as it is in heaven? Is it not true that your kingdom must come? Did you not give to some souls, dear to you, a vision of the future renewal of the Church? —St. Louis de Montfort, Prayer for Missionaries, n. 5; www.ewtn.com

For nearly fifteen years, I have dedicated myself to these writings here, building upon the foundation of the Scriptures, Early Church Fathers, Popes, mystics and seers, and then the works of theologians like Rev. Fr. Joseph Iannuzzi, the late Fr. George Kosicki, Benedict XVI, John Paul II, and others. The foundation is strong; the message nearly indisputable, especially as it is confirmed by the “signs of the times” that themselves act, daily, as heralds that Jesus Christ is coming.

For years, I trembled in my boots, wondering if I was somehow misleading my readers, afraid of presumption, terrified of tumbling over the treacherous cliffs of prophecy. But as time went on, supported by my spiritual director (who appointed one of the most brilliant and prophetic minds in the Church to oversee my writings for a time, Michael D. O’Brien), I began to realize that there is no need to speculate, to draw rash conclusions. God has been speaking through the centuries steadily and clearly through the Magisterium and Our Lady, preparing the Church for the great hour of her own “passion, death, and resurrection” that would see the return of Jesus. But not in the flesh! No! Jesus already came in the flesh. He is returning, rather, to establish His Kingdom on earth as it is in Heaven. As my dear friend Daniel O’Connor says so beautifully, “Two thousand years later, the greatest prayer will not go unanswered!”

Thy Kingdom Come, Thy will be done on earth as it is in Heaven. —from the Pater Noster (Matt 6:10)

It’s funny how we pray this every day and yet do not really consider what we are praying! The coming of the Kingdom of Christ is equivalent to His will being done “on earth as it is in heaven.” What does this mean? It means that Jesus has come, not only to save us, but to sanctify us by reestablishing in man what was lost in the Garden of Eden: the union of Adam’s will with the Divine Will. By this, I do not mean a mere perfect conformation of one’s will to God’s. Rather, it is the fusion of God’s will in our own so that there is only a single will remaining. In this way, the Bride of Christ will be divinized fully into Christ’s likeness such that she will truly become Immaculate…

…that He might present to himself the church in splendor, without spot or wrinkle or any such thing, that she might be holy and without blemish. (Ephesians 5:27)

For the wedding day of the Lamb has come, his bride has made herself ready. She was allowed to wear a bright, clean linen garment. (Rev 19:7-8)

And this grace, brothers and sisters, has never been given to the Church until now. It is a Gift that God has reserved for the last times:

It will be the reign of Christ with His saints that is spoken of in Revelation 20—a spiritual resurrection of what was lost in Eden.

They came to life and they reigned with Christ for a thousand years. The rest of the dead did not come to life until the thousand years were over. This is the first resurrection. (Rev 20:4-5)

This reign is nothing other than the New Pentecost prophesied by the popes, that “new springtime” and “Triumph of the Immaculate Heart” because…

At last, Our Lady will see within her own children a perfect and immaculate reflection of herself as they take up her own Fiat in order to live in the Divine Will as she did. This is why it is called the “Triumph of her Immaculate Heart” because the Kingdom of the Divine Will that reigned in her own soul will now reign in the Church as the climax of salvation history. Thus, said Benedict, praying for this Triumph…

…is equivalent in meaning to our praying for the coming of God’s Kingdom. —Light of the World, p. 166, A Conversation With Peter Seewald

And the Kingdom of Christ is found on earth in His Church, which is His mystical Body.

The Church “is the Reign of Christ already present in mystery…” At the end of time, the Kingdom of God will come in its fullness. —Catechism of the Catholic Church, n. 763

It is in these “end times” in which we are living that Our Lady and the Popes have announced the coming of the Risen Sun, Jesus Christ, to bring a new dawn in the world—the Day of the Lord, which is the fullness of the Kingdom of the Divine Will. It is a coming in order to restore in the Bride of Christ what the new Adam, Jesus, is in Himself:

For the mysteries of Jesus are not yet completely perfected and fulfilled. They are complete, indeed, in the person of Jesus, but not in us, who are his members, nor in the Church, which is his mystical body. —St. John Eudes, treatise “On the Kingdom of Jesus”, Liturgy of the Hours, Vol IV, p 559

Thus, the coming we speak of here is not that return of Jesus in glory at the very end of the world, but the Church’s “Easter Sunday” after the “Good Friday” that she is now passing through.

Whereas people had previously spoken only of a twofold coming of Christ—once in Bethlehem and again at the end of time—Saint Bernard of Clairvaux spoke of an adventus medius, an intermediate coming, thanks to which he periodically renews His intervention in history. I believe that Bernard’s distinction strikes just the right note… —POPE BENEDICT XVI, Light of the World, p.182-183, A Conversation With Peter Seewald

It is the fulfillment of the “Our Father” not only within the Church but to the ends of the earth as Our Lord Himself said would happen:

In my series on The New Paganism and the epilogue The Popes and the New World Order, I detailed how the Kingdom of the Anti-will is now climaxing in our times. It is a kingdom that, at its very core, is a rebellion against God’s will. But now, in the remaining days of Advent, I want to turn toward the coming of the Kingdom of the Divine Will that will overthrow Satan’s long night over mankind. This is the “new dawn” prophesied by Pius XII, Benedict the XVI and John Paul II.

After purification through trial and suffering, the dawn of a new era is about to break. —POPE ST. JOHN PAUL II, General Audience, September 10, 2003

This is the “restoration of all things in Christ” that St. Pius X prophesied:

When it does arrive, it will turn out to be a solemn hour, one big with consequences not only for the restoration of the Kingdom of Christ, but for the pacification of… the world. —POPE PIUS XI, Ubi Arcani dei Consilioi “On the Peace of Christ in his Kingdom”, December 23, 1922

This is the “period of peace”, the Era of Peace, the “Sabbath Rest” foretold by the Early Church Fathers and echoed by Our Lady in which the Bride of Christ will reach the pinnacle of her sanctity, united interiorly in the same kind of union as the saints in heaven, but without the beatific vision.

We do confess that a kingdom is promised to us upon the earth, although before heaven, only in another state of existence… —Tertullian (155–240 A.D.), Nicene Church Father; Adversus Marcion, Ante-Nicene Fathers, Henrickson Publishers, 1995, Vol. 3, pp. 342-343)

It is the Kingdom of the Divine Will, which will reign “on earth as it is in heaven” in such a way as to transform the remnant Church into a beautiful Bride and release creation from its agonizing groans as it eagerly awaits the “revelation of the children of God.” [1]

It is the Sanctity not yet know, and which I will make known, which will set in place the last ornament, the most beautiful and brilliant among all the other sanctities, and will be the crown and completion of all the other sanctities. —Jesus to Servant of God, Luisa Piccarreta, Manuscripts, Feb 8th, 1921; excerpt from The Splendor of Creation, Rev. Joseph Iannuzzi, p. 118

Jesus is Coming, He is coming! Don’t you think you should prepare? I will try, with Our Lady’s assistance, to help you in the days ahead to understand and prepare for this great Gift…

Dear Holy Father… He is Coming!

The Coming New and Divine Holiness