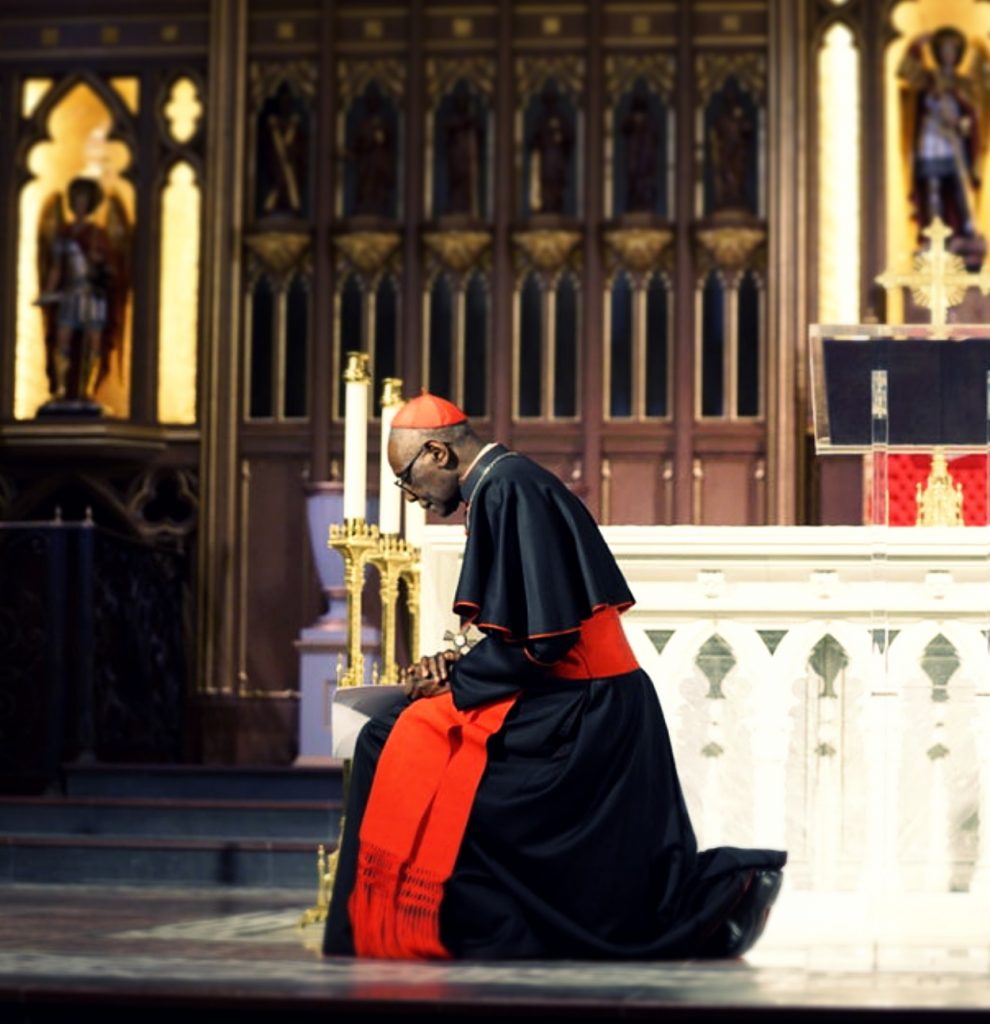 CARDINAL Sarah has given a stunning, perceptive and prescient interview in the Catholic Herald today. It not only repeats “the now word” in terms of the warning that I have been compelled to speak for over a decade, but most especially and importantly, the solutions. Here are some of the key thoughts from Cardinal Sarah’s interview along with links for new readers to some of my writings that parallel and expand his observations:

This is a global not regional crisis with its roots in the Enlightenment period:

CS (Cardinal Sarah): The spiritual crisis involves the entire world. But its source is in Europe. People in the West are guilty of rejecting God… The spiritual collapse thus has a very Western character. —Catholic Herald, April 5th, 2019

The rise of an economic “beast”:

CS: Because [Western man] refuses to acknowledge himself as an heir [of spiritual and cultural patrimony], man is condemned to the hell of liberal globalization in which individual interests confront one another without any law to govern them besides profit at any price.

TNW: Capitalism and the Rising Beast and The New Beast Rising 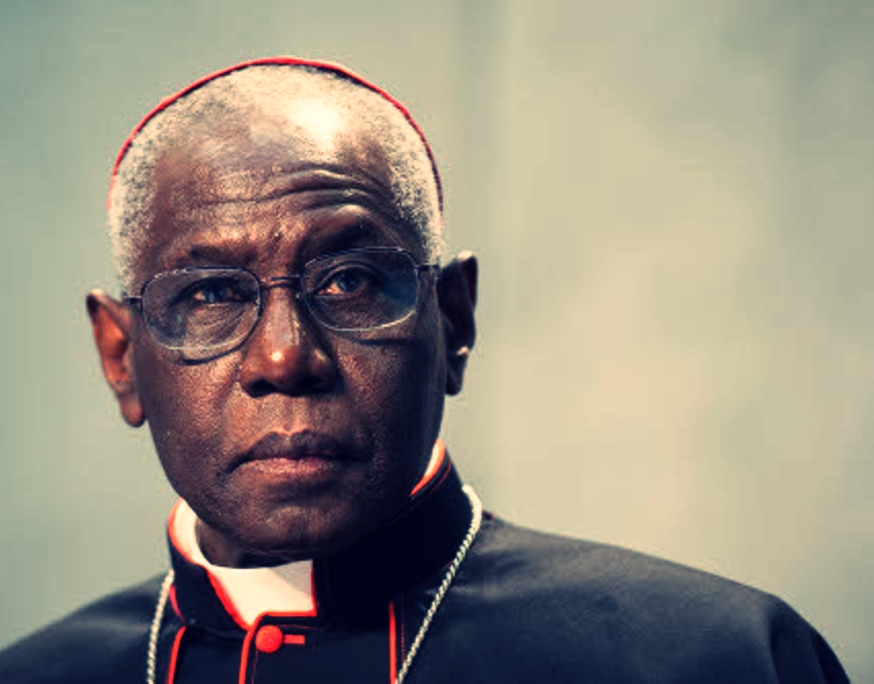 The crisis of fatherhood:

CS: I want to suggest to Western people that the real cause of this refusal to claim their inheritance and this refusal of fatherhood is the rejection of God. From Him we receive our nature as man and woman.

TNW: A Priest in My Own Home: Part Iand Part II, On Becoming a Real Man, andThe Coming Revelation of the Father

On the movement of “gender ideology” toward the counterfeit man:

CS: The West refuses to receive, and will accept only what it constructs for itself. Transhumanism is the ultimate avatar of this movement. Because it is a gift from God, human nature itself becomes unbearable for western man. This revolt is spiritual at root.

TNW: The Coming Counterfeit and The Parallel Deception

On the false quest for freedom apart from the truth:

CS: A freedom that is not itself oriented and guided by truth is nonsensical. Error has no rights… Western man is afraid of losing his freedom by accepting the gift of true faith. He prefers to close himself up inside a freedom that is devoid of content.

TNW: The Quest for Freedom 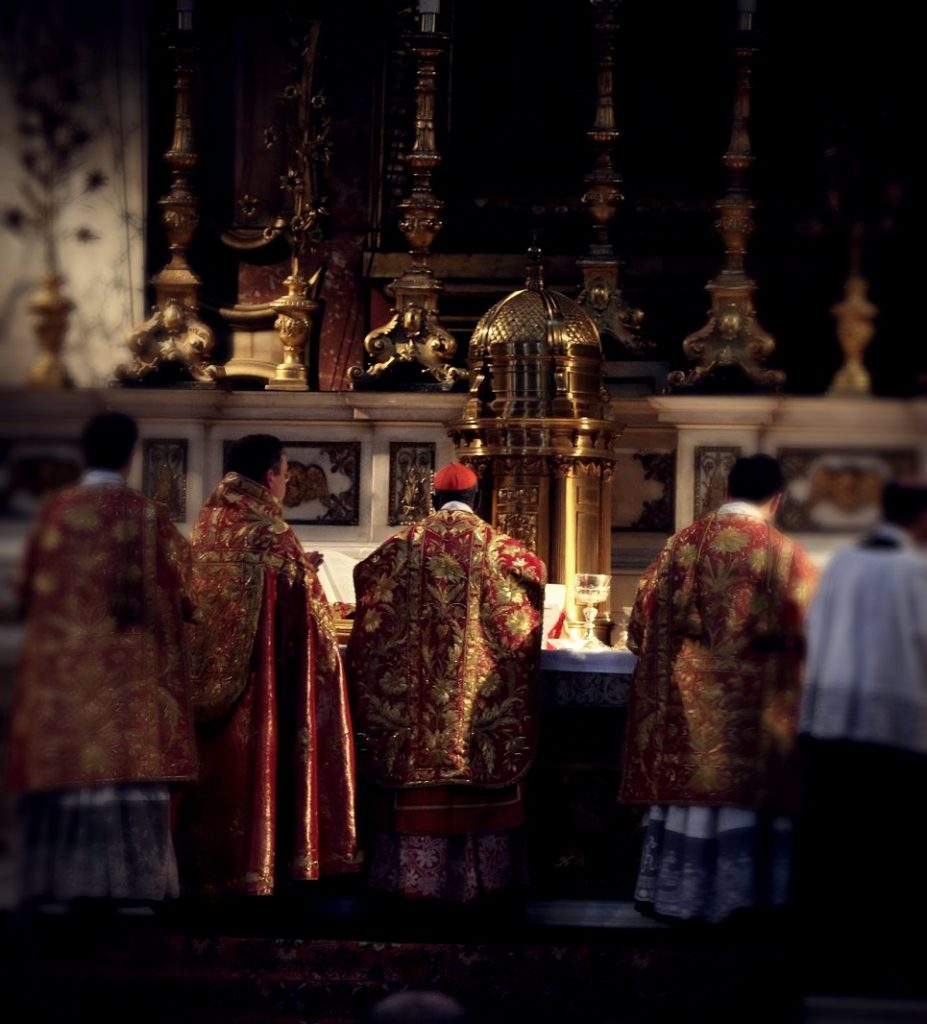 The crisis in the priesthood:

CS: I think that the crisis of the priesthood is one of the main factors in the crisis of the Church. We have taken away priests’ identity. We have made priests believe that they need to be efficient men. But a priest is fundamentally the continuation of Christ’s presence among us. He should not be defined by what he does, but by what he is: ipse Christus, Christ Himself.

TNW: Wormwood and Loyality, The Catholic Fail, My Young Priests, Be Not Afraid! and So, You Saw Him Too?

We are living the Hour of the Garden of Gethsemane and the Passion:

CS: Today the Church is living with Christ through the outrages of the Passion. The sins of her members come back to her like strikes on the face… The Apostles themselves turned tail in the Garden of Olives. They abandoned Christ in His most difficult hour… Yes, there are unfaithful priests, bishops, and even cardinals who fail to observe chastity. But also, and this is also very grave, they fail to hold fast to doctrinal truth! They disorient the Christian faithful by their confusing and ambiguous language. They adulterate and falsify the Word of God, willing to twist and bend it to gain the world’s approval. They are the Judas Iscariots of our time.

TNW: Our Passion, The Hour of Judas, The Scandal, The Shaking of the Church and When the Stars Fall

On homosexuality and sins against chastity:

CS: There is no “homosexual problem” in the Church. There is a problem of sins and infidelity. Let us not perpetuate the vocabulary of LGBT ideology. Homosexuality does not define the identity of persons. It describes certain deviant, sinful, and perverse acts. For these acts, as for other sins, the remedies are known. We must return to Christ, and allow him to convert us.

The real crisis in the Church:

CS: The crisis of the Church is above all a crisis of the faith. Some want the Church… not to speak about God, but to throw itself body and soul into social problems: migration, ecology, dialogue, the culture of encounter, the struggle against poverty, for justice and peace. These are of course important and vital questions before which the Church cannot shut her eyes. But a Church such as this is of interest to no one. The Church is only of interest because she allows us to encounter Jesus.

TNW: The Crisis Behind the Crisis, Only Jesus Walks on Water, and A Gospel for All

Saints, not programs, will renew the West: 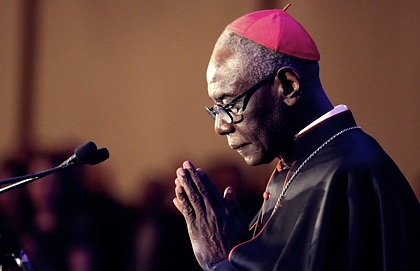 CS: Some believe that the history of the Church is marked by structural reforms. I am sure that it is the saints who change history. The structures follow afterwards, and do nothing other than perpetuate what the saints brought about… The Faith is like a fire, but it has to be burning in order to be transmitted to others. Watch over this sacred fire! Let it be your warmth in the heart of this winter of the West.

TNW: Resurrection, not Reform, The Triumph – Part II, and The Coming New and Divine Holiness

On atheism in our culture:

CS: I speak about a poison from which are all suffering: a virulent atheism. It permeates everything, even our ecclesiastical discourse. It consists in allowing radically pagan and worldly modes of thinking or living to coexist side by side with faith… We must no longer compromise with lies.

TNW: When Communism Returns, and The Good Atheist

Our collapse, like Rome, and the return to barbarianism:

TNW: Barbarians at the Gates, On the Eve, The Growing Mob, and On the Eve of Revolution 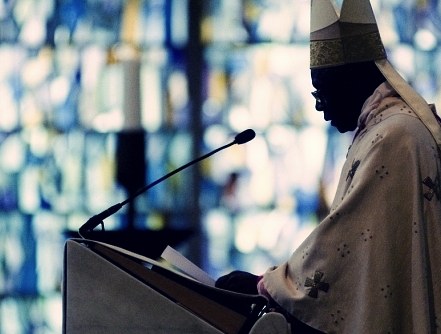 On the new totalitarianism:

CS: A state that relegates God to the private sphere cuts itself off from the true source of rights and justice. A state that pretends to found rights on good will alone, and does not seek to found the law on an objective order received from the Creator, risks falling into totalitarianism.

TNW: The Progression of Totalitarianism,What is Truth?, The Hour of Lawlessness, The Great Corralling and Fake News, Real Revolution

The threat of Islam and uncontrolled migration:

CS: How could I not emphasize the threat posed by Islamism? Muslims despise the atheistic West… To the countries of the third world, the West is held out as a paradise because it is ruled by commercial liberalism. This encourages the flow of migrants, so tragic for the identity of peoples. A West that denies its faith, its history, its roots, and its identity is destined for contempt, for death, and disappearance.

CS: I call upon Christians to open oases of freedom in the midst the desert created by rampant profiteering. We must create places where the air is breathable, or simply where the Christian life is possible. Our communities must put God in the center. Amidst the avalanche of lies, we must be able to find places where truth is not only explained but experienced.

TNW: The Sacrament of Community, The Welcoming Church, and The Coming Refuges and Solitudes

On the necessity of evangelization in the world: 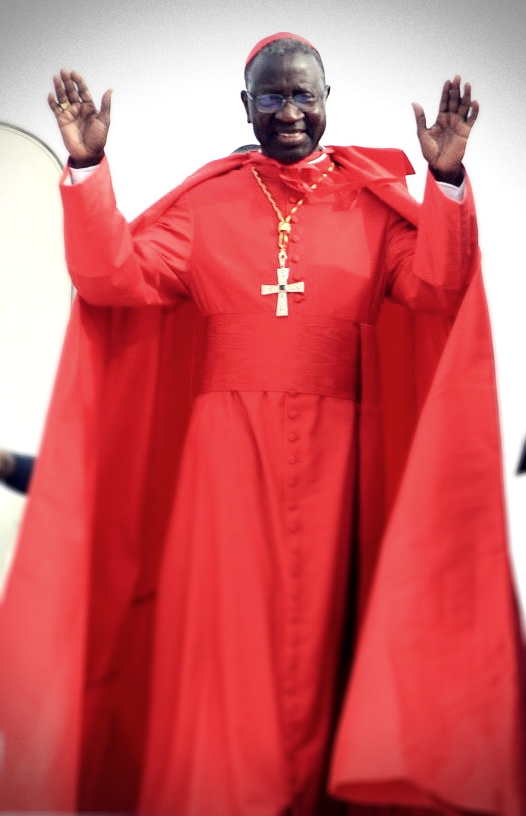 CS: Christians must be missionaries. They cannot keep the treasure of the Faith for themselves. Mission and evangelization remain an urgent spiritual task.

TNW: A Gospel for All, Finding Jesus,  The Urgency for the Gospel,  and Jesus… Remember Him?

On Christians’ role in society:

CS: A society permeated by the Faith, the Gospel, and natural law is something desirable. It is the job of the lay faithful to construct it. That is in fact their proper vocation… A just society disposes souls to receive the gift of God, but it cannot give salvation… There is great need to proclaim the heart of our Faith: only Jesus saves us from sin. It must be emphasized, however, that evangelization is not complete when it takes hold of social structures. A society inspired by the Gospel protects the weak against the consequences of sin.

TNW: On Just Discrimination, The Center of Truth, The Authentic Mercy, and Soft on Sin 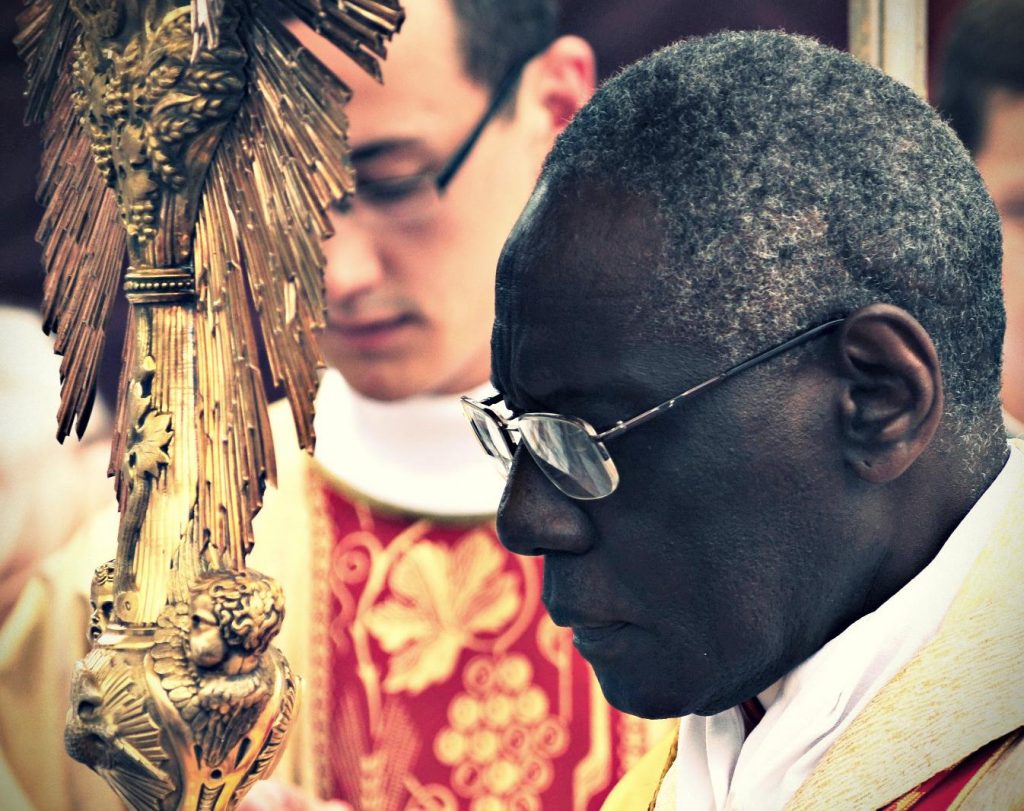 On the place of love and the Cross in evangelization:

CS: The goal of evangelization is not world domination, but the service of God. Don’t forget that Christ’s victory over the world is…the Cross! It is not our intention to take over the power of the world. Evangelization is done through the Cross.

TNW: The Cross is Love, The Power of the Cross, The Cross of Loving, The Daily Cross, and Lightening the Cross

The importance of the interior life:

CS: Evangelization is not a question of success. It is a profoundly interior and supernatural reality.

TWN: Momma’s Business, In the Footsteps of St. John, and Prayer Retreat

To read the entire interview with Cardinal Sarah that includes so much more wisdom and valuable insights, go to The Catholic Herald.