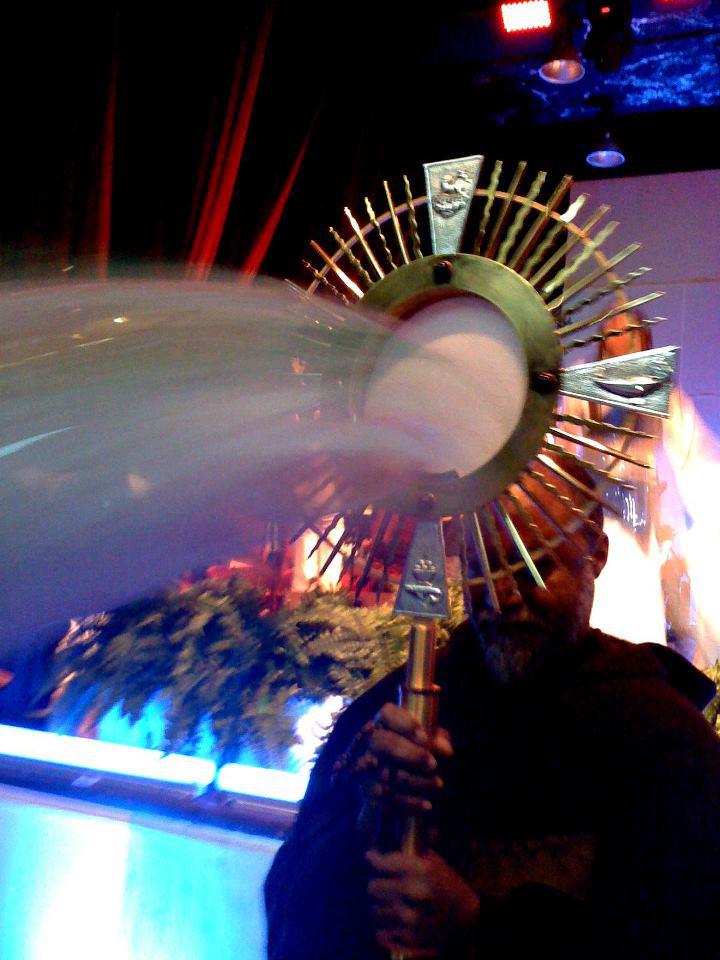 I JUST returned from Arcātheos, back to the mortal realm. It was an incredible and powerful week for all of us at this father/son camp situated at the base of the Canadian Rockies. In the days ahead, I will share with you the thoughts and words which came to me there, as well as an incredible encounter all of us had with “Our Lady”.

But I can’t pass by this day without commenting on both the Mass readings and a photo that appeared recently on Spirit Daily. While I cannot confirm the authenticity of the photo (which was apparently sent from one priest to another), I can confirm the significance of the imagery.

In the revelations of Jesus to St. Faustina in which He reveals the depths of His Divine Mercy, the Lord often speaks of the “ocean” of His love or mercy that He desires to pour out on mankind. One day in 1933, Faustina recounts:

From the moment I woke up in the morning, my spirit was totally submerged in God, in that ocean of love. I felt that I had been completely immersed in Him. During Holy Mass, my love for Him reached a peak of intensity. After the renewal of vows and Holy Communion, I suddenly saw the Lord Jesus, who said to me with great kindness, My daughter, look at My merciful Heart. As I fixed my gaze on the Most Sacred Heart, the same rays of light, as are represented in the image as blood and water, came forth from it, and I understood how great is the Lord’s mercy. And

again Jesus said to me with kindness, My daughter, speak to priests about this inconceivable mercy of Mine. The flames of mercy are burning Me—clamoring to be spent; I want to keep pouring them out upon souls; souls just don’t want to believe in My goodness. —Divine Mercy in My Soul, Diary, n. 177

The image she speaks of is the one she had painted according to the vision she saw of Him, where rays of light poured from His Heart.

A few years ago, as I rode together to speak at a conference with Fr. Seraphim Michelenko, who translated Faustina’s diary, he explained to me that Jesus is looking down, as though He were on the Cross. Faustina later penned this prayer:

You expired, Jesus, but the source of life gushed forth for souls, and the ocean of mercy opened up for the whole world. O Fount of Life, unfathomable Divine Mercy, envelop the whole world and empty Yourself out upon us. —n. 1319

Faustina clearly linked the Heart of Jesus with the Eucharist. One day after Mass, having felt an “abyss of misery” in her soul, she said, “I want to approach Holy Communion as a fountain of mercy and to drown myself completely in this ocean of love.” [1]

During Holy Mass, when the Lord Jesus was exposed in the Blessed Sacrament, before Holy Communion I saw two rays coming out from the Blessed Host, just as they are painted in the image, one of them red and the other pale. —n. 336

She saw this several times, including during Adoration:

…when the priest took the Blessed Sacrament to bless the people, I saw the Lord Jesus as He is represented in the image. The Lord gave His blessing, and the rays extended over the whole world. —n. 420

Now, my brothers and sisters, though you and I cannot see it, this occurs at every Mass and through every Tabernacle in the world. Blessed are you who cannot see yet still believe. But, like the photo above, God does lift the veil from time to time to remind us that His Sacred Heart is clamoring to pour out mercy upon us all.

I remember a night of Adoration that I led in Louisiana several years ago. An eight year old girl was bowed with her face to 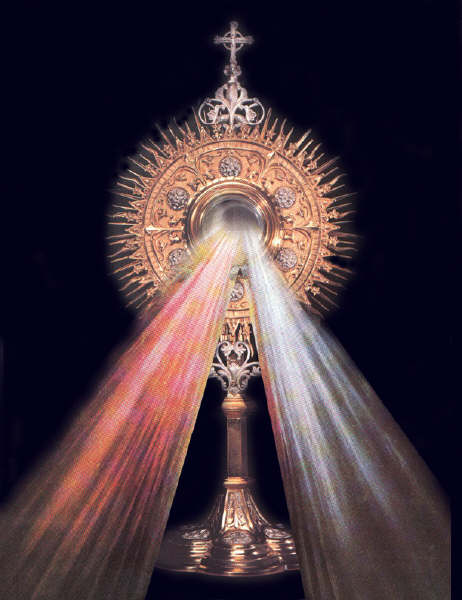 the ground in front of the monstrance that contained the Eucharist, and she seemed stuck in that posture. After the Eucharist was placed back in the Tabernacle, her mother asked her why she couldn’t move, and the girl exclaimed, “Because there were thousands of buckets of love being poured over me!” Another time, a woman drove across three states to attend one of my events. We ended the evening in Adoration. Sitting at the back in prayer, she opened her eyes to look at the Eucharist exposed on the altar. And there He was… Jesus, standing directly behind the Host such that it was over His Heart. From it, she said, rays of light spread over the entire congregation. It took her a week before she could even speak of it.

The Heart of Jesus is the Eucharist. It is His Body, Blood, soul and divinity. [2] Several Eucharist miracles have confirmed this beautiful reality where the Host has turned into actual flesh. In Poland on Christmas Day in 2013, a Eucharistic Host fell to the ground. Following customary procedures, the parish priest placed it in a container of water to dissolve. The Bishop of Legnica wrote in a letter to his diocese that “Soon after, stains of the red colour appeared.” [3] A fragment of the Host was sent to the Department of Forensic Medicine who concluded:

The histopathological tissue fragments were found containing a fragmented part of the skeletal muscle…. The whole image… is most similar to the heart muscle… as it appears under the strains of agony. —from the Letter of Bishop Zbigniew Kiernikowski; jceworld.blogspot.ca

In today’s Gospel, Jesus feeds the thousands gathered around Him.

Notably, there are twelve baskets left over after everyone had their fill. Is it not symbolic of the superabundance of mercy and love that Jesus pours out, through the Twelve Apostles and their successors, in the Masses said to this day throughout the entire world?

So many are tired, afraid, sick or worn down. Go then, and immerse yourself in the Ocean of Mercy. Sit before a Tabernacle, or better yet, find a Mass where you can receive His very Heart into your own… and then let the waves of His mercy and healing love wash over you. Only in this way, by coming to the Source, can you in turn be an instrument of that same mercy to those around you.

My daughter, know that My Heart is mercy itself. From this sea of mercy, graces flow out upon the whole world. No soul that has approached Me has ever gone away unconsoled. All misery gets buried in the depths of My mercy, and every saving and sanctifying grace flows from this fountain. My daughter, I desire that your heart be an abiding place of My mercy. I desire that this mercy flow out upon the whole world through your heart. Let no one who approaches you go away without that trust in My mercy which I so ardently desire for souls. —n. 1777